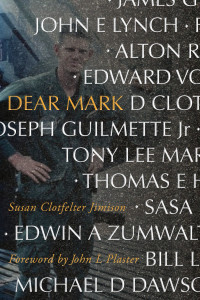 Today in honor of Memorial Day, The Writing Well features Susan Clotfelter Jimison, whose book, Dear Mark, has just been published in time for this holiday honoring our fallen servicemen and women.

Forty-five years ago, Susan was a 14-year-old Florida teen preparing for her sister’s wedding when she lost her only brother, a pilot in Vietnam. She has mourned him ever since, and over many years, has pieced together a beautiful tribute to his life. Susan shares her journey uncovering her brother’s final months through the men Mark served and sacrificed with four decades ago.

I met Susan when I joined Jedwin Smith’s writers group. It’s been an honor to come along on her courageous journey — the group has shed tears along as we’ve come to know Mark and his fellow Pink Panther pilots, who risked their lives daily to save others in harm’s way.

Jedwin, who wrote Our Brother’s Keeper, about losing his own brother in Vietnam, put it best in his note on her book jacket: “Courage—that’s what it took to fly those fearsome Cobra gunships into the hellfire that was the Vietnam War, and it’s what author Susan Jimison calls upon as she opens her heart and reflects on her heroic aviator brother Mark, who died piloting his Cobra along the Laotion.”

God bless all our soldiers past and present, and God bless Susan for the gift of this story.

When I began to write Dear Mark I struggled with my writing to not sound like I was trying to tell a war story—a war I was not in. It wasn’t until someone in my writing group suggested I tell my story and Mark’s in letters instead of traditional chapters that I finally began to see light at the end of the tunnel.

“Write him just like you did when he was in Vietnam,” and when I did, it felt natural. And I saw such progress where before I struggled with every chapter. The more progress I saw, the more inspired I became to finish my memoir.

I was able to write about the dangerous missions Mark flew in an attack helicopter, I merged the past and the present, and I “told Mark” about future plans of my next book. Sometimes the writing was tricky with past and present tenses. Occasionally, there were tears even though it’s been forty-five years.

Going forward, I feel a tremendous amount of pride to have written a book to honor my brother who was so brave, so young, and missed so much!

I’m enjoying the letters I have received from people who have read Dear Mark. But as any author will tell you, the real work begins after it’s printed. Marketing has become my full time job for Dear Mark.

Stoicism in the Face of Unspeakable Loss

In the late 60s and early 70s no one talked about the war in Vietnam. Not the neighbors, not

the schools, not even family. Almost as if we didn’t talk about it—it wasn’t happening.

In 1997 I tracked down the men who flew in Vietnam with my brother. A true band of brothers who have never forgotten the fallen or the sacrifice of the families.

During my discovery of learning about my brother as a adult and a warrior, something unexpected happened. You never know where the roads in life will take you. I met and fell in love with one of Mark’s comrades in 1999 and we were married in 2006.

In a letter to Mark:
“…So the guys know my story—which is really your story. From day one they understood. They get it. There haven’t been many places I’ve been since 1968— back when you deployed to Vietnam— that people “get it.” If the subject of Vietnam came up, and it was rare if it did, people didn’t really understand it.

Susan Clotfelter Jimison resides in Atlanta, Georgia with her husband Mike and the best dog in the world, Dude.  Her book debut entitled Dear Mark, is the culmination of a ten-year project to piece together her brother’s final days during the Vietnam War. Jimison is currently working on her second book Letters from John (projected completion date: April 2015) Historical letters and pictures from her cousin, John Donovan, provide a personal lens to glimpse the final days of the officer-turned mercenary life of the world-renowned Flying Tigers. Jimison’s work aims to shed light on the far-reaching effects of the loss of family members in war and the profound insight John had of the present and the future he was shorted.

Visit Susan’s author page to purchase her book and learn more about her book research and work with Vietnam Veterans groups.