One Writer’s take on 9/11, the death of bin Laden, and Obama’s defining speech

Do you remember where you were on 9/11? I do – that bright September morning 10 years ago I was in my apartment in Atlanta, getting ready to start my work day from home. I got a call from my girlfriend who worked in PR at NYU, urging me to “turn the TV on now.” I called my sister over and together we watched in disbelief as CNN showed a plane crash into the first tower. No surprise, my workday never happened as I remained glued in front of the TV the rest of the day.

9/11 is to my generation’s collective consciousness what John F. Kennedy’s assassination was to my parents’ generation. In the years since those attacks, life went on for many of us (I met my husband, started a family and worked to build my own piece of the American Dream).

It wasn’t lost on me the sacrifices being made by our servicemen and women in the global struggle against terrorism. In recent years, the recession and other domestic concerns were front of mind rather than this war, especially as the housing market collapsed,  the stock market imploded and joblessness increased.

So, when President Obama announced Monday night that the mastermind of 9/11 was killed by Navy SEALs in a secret raid in Pakistan, I felt elation and a sense of justice, and, above all, relief that “Geronimo” as he was called by our intelligence community, was no more.
‘Images of 9/11 Seared in our National Memory’

As a writer, I thought President Obama’s speech was well crafted and hit the important points that an event of this magnitude should convey.
…His words needed historical context, clarity of purpose, and faith in the resiliency of our country to see this manhunt (and the broader terrorrism struggle) through.
…Above all, his words needed to tell a story. He was most effective as a storyteller when describing how the “images of 9/11 are seared in our national memory.” He said the “worst images” were those not visible publicly – such as the homes which had “an empty seat at the dinner table” and the children forced to grow up without a parent. 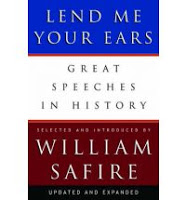 “Great speeches are made on occasions of emotional turmoil,” the late political columnist William Safire wrote in his book, Lend Me Your Ears – Great Speeches in History. Safire, who was Nixon’s speechwriter, also says that at their core speeches are storytelling and the best way to begin even an informal speech is with a story.

Speech Coach: Obama Delivered
“I think President Obama did a good job,” says my colleague Carmie McCook, a Washington, D.C.-based speech and crisis communications coach.
For a speech of this importance, McCook says three things needed to be conveyed– the “what,” the “why” and the “what’s next.”

“You need to speak to your audience and address their top concern,” she told me in an informal phone interview. “In this case, the terrorist of our decade is now gone.”

She adds that you need to provide as much detail as possible – observing that as the president recounted the operation in the compound, “you were visually going there with the SEALs,” she says.

“Finally, you need to explain what’s next – where we go from there. He made it clear that this doesn’t mean our war is over but it certainly means that we’ve made a huge impact on people.”

Obama’s speechwriter Jon Favreau certainly knows how to evoke emotions and convey the resolve that brought the country together after 9/11: “And tonight, let us think back to the sense of unity that prevailed on 9/11. I know that it has, at times, frayed. Yet today’s achievement is a testament to the greatness of our country and the determination of the American people.”

My One Peeve
If there was one thing I would have changed in President Obama’s remarks, it would be his use of “I” – “I directed,” “at my direction” “I repeatedly”…I understand the need to show strong leadership so close to a re-election bid, but I would have used more inclusive words like “we” and “us” every time.  Afterall, it was a collective effort that achieved this mission, and it will take every one of us to be vigilant to safeguard our country from another day like September 11, 2001. I pray that Monday’s actions lead us further along that noble path.
Links to read more
Associated Press
Reuters Front Row Washington
NPR
Economic Times