Prev
1
A Pre-Convention Interview with Dragon*Con Writers’ Track Director
24 July 2012
Next
0
Outgoing IABC Executive Chair Talks Future of Communications Profession
01 September 2012
August 7, 2012 by icreateatl in Travel & History
This weekend my family and I returned from a fun-filled week in Colonial Williamsburg and surrounding venues in Yorktown and Jamestown.
All three of these places, which form the Historical Triangle, took us back in time to understand our country’s history. Williamsburg, with its authentic buildings and memorable storytelling, gave us an appreciation for life as a colonialist under British rule and forces that led to our nation’s struggle for independence.
I wouldn’t hesitate to repeat this adventure; the week of July 26 was ideal timing – we escaped Hotlanta for a noticeably milder climate, and experienced only one afternoon of heavy rain, which we mostly avoided by touring the Governor’s Palace.
Williamsburg, the home to the College of William and Mary, is a history buff’s dream destination. Beautiful museums, refurbished colonial homes,  businesses operated by silversmiths and other skilled trades people, a printer and post office, and taverns serving period fare – all allowed us to go back in time and experience America with 18thcentury eyes.
We learned that much of colonial Williamsburg’s restoration was due to the philanthropy of John D. Rockefeller Jr., who, along with his wife, Abby, restored this town to its colonial roots beginning in 1926. Over the course of the project, some 720 Williamsburg buildings were demolished and rebuilt. Missing Colonial structures were reconstructed on their original sites during the 1930s. Others were restored to estimates of 18th-century appearance, with traces of later buildings and improvements removed.
We spoke with authentically dressed reenactors depicting both everyday citizens and key revolutionary figures such as George Washington, Thomas Jefferson and Patrick Henry. In heartfelt debates and chats with “citizens” of Virginia, these figures were fully immersed in the time period, never stepping out of their roles. I chatted with the milliner, wig maker and operator of an apothecary, as well as bantered with a military chaplain and a second lieutenant in the Third Virginia Regiment. “George Washington” addressed us twice; as a successful planter a year before war broke out when the colonies were not yet in open conflict, and a second time on horseback when he was commander of the Continental Army on the eve of leaving for Yorktown and the definitive battle of the war.
A National Park Ranger tour of Yorktown provided us historical context into the strategic value of the city (with its deep waterways), and the allied strength of Colonial and French troops led by George Washington and Comte de Rochambeau. Yorktown proved to be the last major land battle of the American Revolutionary War. What I didn’t realize until touring the city was how pivotal a surprise move over land coordinated with a French naval blockade was to Colonial and French success against the world’s greatest military power of the time.
We toured the Indian village and fort carefully recreated near the sight of the original Jamestown Colony. We walked aboard replicas of the three small English ships that arrived in the Chesapeake Bay in 1607. The ships’ 105 passengers and 34 crew members later christened the land “Virginia” in honor of the Virgin Queen, the beloved English matriarch who had passed away in 1603.
I added to my historical book collection with some compelling revolutionary reads, including Washington’s Spies: The Story of America’s First Spy Ring, and Signing their Lives Away, an account of the 56 signers of the Declaration of Independence, who literally signed their death warrants by openly defying King George III, and the many strange fates that awaited them. 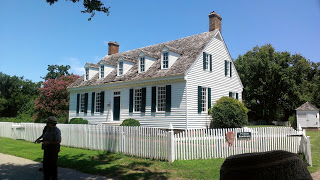 My husband and I shared the story of Patriot spy Nathan Hale to our children, as well as the story of the Indian princess Pocahontas. We bought a biography of Benjamin Franklin, a narrative about Thomas Jefferson’s women, and the history of Jamestown Settlement, among others. It was a great trip, and one that I hope to take again.
In closing, here are a few memorable quotes from the patriots who debated and dreamed of a future without tyranny, and who willingly sacrificed their livelihoods and their safety to pave the way for American independence.

“Is life so dear or peace so sweet as to be purchased at the price of chains and slavery? Forbid it, Almighty God! I know not what course others may take, but as for me, give me liberty, or give me death! — Patrick Henry
“The tree of liberty must be refreshed from time to time with the blood of patriots and tyrants.”  — Thomas Jefferson
“Firearms are second only to the Constitution in importance; they are the peoples’ liberty’s teeth.” – George Washington
“When the people fear the government, there is tyranny. When the government fears the people, there is liberty.” — Thomas Jefferson
“I only regret that I have but one life to lose for my country.” — Nathan Hale
“I must study politics and war that my sons may have liberty to study mathematics and philosophy.” — John Adams

“Where liberty is, there is my country.” – Benjamin Franklin