Why Water for Elephants Works 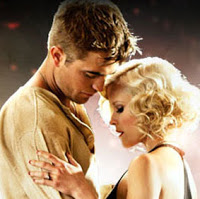 “When two people are meant to be together, they will be together. It’s fate.” – Jacob Jankowski, Water For Elephants

Tonight I accompanied my friend and dad to see the critically acclaimed Water for Elephants.  The movie reflected my favorite genre, romantic drama set in an historical context.  The film transports you to Depression era America and the world of a struggling circus, where you get a bird’s eye view of the complex relationships between the people (and the animals) who inhabit that world.

The film, based on the New York Times’ bestselling book by Sara Gruen, who grew up in Ontario, delivered the goods — keeping me and other moviegoers transfixed. The movie had unforgettable flashes of both inhumanity and humanity, played out by Jacob (played by Rob Pattinson of Twilight fame), a young vet-in-training who flees unspeakable tragedy by hitching a ride on a traveling circus; Marlena, an orphan-turned star performer and circus wife (played by Reese Witherspoon); and of course, Christoph Waltz as the controlling, ruthless and jealous ringmaster August.

It doesn’t hurt that the story takes you inside the gritty world of a struggling circus during a time when one in four Americans was jobless.  I found myself asking, “Why does Marlena stay?” and “Why does Jacob?” at times when August’s violent outbursts are at their most out of control.

To me, Water for Elephants is storytelling at its best — with unforgettable (and flawed) characters. It’s a story about relationships and the bonds formed by people and animals, and includes a surprising climatic conclusion. Kudos to the filmmakers in crafting the final scenes of the movie using black-and-white old home movie flashbacks.

Gruen writes in her book, “Life is the most spectacular show on earth.”   This movie certainly lives up to that billing.

Check out the movie trailer and a MovieJungle interview with Sara Gruen about her story and its transformation to the big screen.