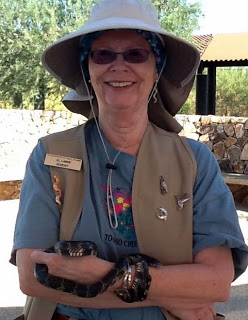 Today is the WordCount Blogathon Swap Day! Fellow blogger, Kathryn Lance, the author of more than 50 published books of fiction and nonfiction, shares the importance of showing rather than telling. In turn, I talk about digging deep into your creative well today at Kathryn Lance’s Books and Musings.

Kathryn’s Sci-fi romance adventure, Pandora’s Genes, the subject of this post, was named “Best New Science Fiction” by Romantic Times in 1986 when it was published. Lance has written numerous articles and short stories, and has taught dozens of writing classes on all levels. Lance, with her husband and four cats, lives in Tucson, Arizona, where she leads bird and reptile walks in a nature park.

Every writer has been told by a writing teacher or editor to SHOW rather than TELL.
A simple way to understand this precept is to use synonyms. To “tell” something is to summarize  it. To “show” something is to illustrate it. In both fiction and nonfiction, if you want the reader to feel an emotional impact, show the reader what is going on. This is harder than simply summarizing, but always well worth the effort.
Here is an example of the difference between telling and showing from my first novel, Pandora’s Genes. The first passage is a summary of a short but crucial scene about halfway through the book. The second passage is the scene as it appeared in the published book.
Passage A:
Zach was sent away as his wife, Leya went into labor. He knew that she was in danger of dying and was very upset. To take his mind off his anxiety and sorrow he chopped wood.
Passage B
It was a cloudy summer day, not really hot, but so humid with an impending rainstorm that the least exertion left him sweating and feeling tired. He positioned a log on the chopping block, brought the axe up above and behind his head, then swung it, thunk. He did this again and again, the movements easy from long years of practice. Wood chips flew around him, stinging his bare chest and arms. Cut wood piled up around him, and his breathing grew heavy as his arms began to tremble with the effort. He did not dare to stop, afraid to lose the comforting sound of the axe blade biting into the wood.
After a time, his muscles stopped responding, and he was forced to rest for a moment. The sounds of the woods became deafening. He heard birds calling their territorial limits to one another; insects scuttling in the leaves; the warm breeze before the storm, pushing the branches of trees. He shivered as the wind took the sweat covering his skin. Sighing, he sat on a log and examined the axe minutely. He had made it himself from an old pre-Change axe blade, and a stout piece of hardwood he had carved himself, carefully fitting it to hold the metal, and binding the two pieces together with strong new-vine ropes. The ancient blade was as shiny as it must have been when it was new: he took care to keep it clean with fish-oil, and sharp on his whetstones. There were nicks and scores in the metal, but it was probably, he thought, in nearly as good condition as when it had been made, untold years ago. He ran his fingers over the blade and looked for signs of wear on the handle. This was the fourth handle he had made for the blade, carefully carving and polishing during long nights in the cabin while Leya read or worked on her projects from the Garden.
He stood, already feeling stiff, and began to gather the wood he had cut into bundles of seven to ten each, tying them carefully with new-vine, and placing them to the side of his work area, in a small shelter he had constructed. A squirrel suddenly clambered down from a tree behind him. He turned, startled, to see the little animal poised on its hind legs, its nose vibrating with its breath, every nerve in its body stretched as it tried to sense possible danger. It looked at him, its black eyes as shiny as the axe blade, then just as abruptly it ran up the tree and disappeared along a leafy limb.
Zach picked up the axe and began again to swing it, cutting the wood as if he could cut out everything else that was happening. Never had he worked so long and so hard. Soon there would be enough wood cut to last the Garden through the entire winter. And there was already more than enough for him and Leya. He became aware of another sound and realized that it was his own breath, rasping, wet, and too rapid. Still he did not stop, not even when the raindrops finally began to fall, washing away the dirt and sweat, then soaking him as a summer cloudburst developed. He could scarcely see what he was doing through the falling water, but still he swung the axe back and up, then down, splitting each precisely placed log as he did so, stopping only to move more wood into position.
“Zach!”
He turned, the axe half-raised, poised to split another log. Her head and shoulders covered with a dark shawl, the old woman stood looking at him. Her face was composed and without expression, and as soon as he saw it he knew the worst had happened.
*****
When you have finished writing a story or novel, go over it for places where you can change summaries into illustrations. For example, if you have a character “crying hysterically,” think how you might show that. (Jodie’s chin began to tremble and her mouth turned white as she bit down on her lower lip. But the trembling spread, from her face to her throat, and then to her lungs as she began to gasp and wheeze, tears now spilling down her cheeks and onto her hands.)