Author of Girl Trouble Discusses the Craft of Short-story Writing 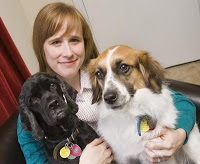 Some nights, all of the things I know for sure — should be able to count on, like gravity and oxygen and sunrise — lose their power over me. I know who killed Felicia. I caught his eye a half-dozen times in the courtroom and simply understood, felt the guilt baking off of him like a fever, settling on me sick and damp and poisoned.
— Excerpt from “Parts,” from Girl Trouble