Prev
0
Author of Girl Trouble Discusses the Craft of Short-story Writing
15 August 2011
Next
2
A Day of Remembrance
11 September 2011
September 10, 2011 by icreateatl in Films & Pop Culture 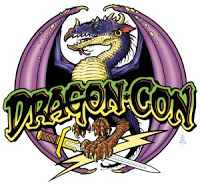 I am finally taking a breath after the long Labor Day weekend and work week to share some thoughts from this year’s DragonCon.  For the second year, I braved the crowds of avatars, wookies, Klingons and Death Eaters at one of the country’s largest sci-fi conventions to hear from some of the best genre writers in young adult and fantasy. Here’s just a few of the folks who made an impression this year.
Carrie Fisher
“I was never that great of an actor.”
Carrie shared – with self-deprecating wit – what it was really like playing the iconic Princess Leia (“it was cool being the only girl”), being engaged to Dan Akroyd and her at-times strained working relationship with director George Lucas, who she later collaborated with as a co-writer on “The Young Indiana Jones Chronicles.”
In her bestselling memoir and one-woman show, Wishful Drinking, Fisher said, “George Lucas ruined my life.” Her disgust with her Star Wars costumes (including having to wrap her breasts) are well documented, with her least-favorite being the infamous metal bikini in Return of the Jedi. “When I laid down, the metal bikini stayed up, so BobaFett could see all the way to Florida.”
Fisher played off the energy of the standing-room only crowd of fans, who heard her talk candidly about her struggle with bipolar disorder. Many fans thanked her for her openness, sharing that they, too, struggled with the condition.
Sherrilyn Kenyon
“I can’t write when it’s quiet – absolute silence makes me insane.”
So says the Dark-Hunter series author, speaking on a New York Times bestselling author tell all panel, fresh from signing a movie and TV series deal earlier this summer (look out, True Blood fans). The prolific author has made the #1 spot on the New York Times bestseller list 16 times in the last three years. She told fans during the  panel that she writes about 100 pages a day. 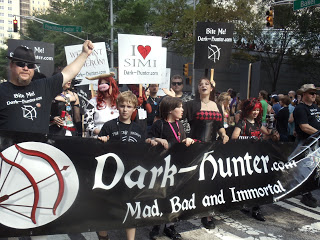 Kenyon says things were always chaotic growing up as a middle child with eight brothers. That’s not changed now that she has three active sons. She told fans how her 16-year-old son has decided to start writing, telling her, “Mom, writing is hard.” Her one guilty pleasure? Helping her boys find ways to kill off their Dungeon and Dragon characters.
She says making the the New York Times Bestseller List doesn’t change your life overnight. She had to work all types of jobs on her way to literary fame and found herself homeless with an infant even after writing six bestsellers.
In chatting with the author as she signed my copy of her newest book, Retribution, I asked her about the cable TV deal for her Dark-Hunter Series. No news yet on the lucky network that will take on the book series; however, fans can rest easy knowing that Kenyon will have a say on the adaptation since she will be a producer.
Charlaine Harris
“The most important message is tolerance.”
That’s what the author hopes readers get when they read her SookieStackhouse novels, which are the inspiration for HBO’s True Blood series.  She deliberately writes about characters with different sexual orientations for this reason.
During the True Blood Q and A she said how glad she is that fellow southerner Alan Ball got the job directing True Blood.  “It’s like they took my book and gave it steroids,” she says of the HBO adaptation.
Later, during the New York Times Bestselling author panel, Harris opened up about her addiction to Facebook(“it’s a terrible use of a writer’s time”) and her daily routine as a writer, saying she writes every day and doesn’t clean her house anymore but still does her family’s laundry.  Her guilty pleasure? Watching Project Runway.
She takes her writing deadlines seriously (“getting paid is a huge inspiration to me”) and recalls being late once – after her mother died.
You can access the full video of DragonCon’s first True Blood panel here.
Michael Stackpole
“Think bigger than one story.”
That was Stackpole’s advice to writers during one of the more popular sessions in his hourly Writer Workshop delivered over 14 hours with fellow New York Times bestselling author Aaron Allston. (Stackpole has said in a recent blog post that he and Aaron are returning in 2012 – this is GREAT news to writers who want to further their craft).
The session I attended, “Writing Careers in the Post-paper Era,” gave attendees an update on the growing E-book market for novelists, noting that the battle between traditional and digital publishers is not about sales, but about “control and access to audiences.” Stackpole urged people to write in packages that are friendly to consumers – instead of a 120,000-word novel, think in terms of three smaller 50,000-word novels. Instead of focusing on a single story, think about developing “a property” where you can tell more than one story in that world. “Series sell.  They breed loyalty – we always come back to them,” he says.  I will write more about Stackpole’s presentation in a future blog post.
Aaron Allston
“Die adjective, die!”
Allston – not unlike Ernest Hemingway – sees little value in adjectives or adverbs for serious writers, calling them “insulating layers,” that do anything but give the reader a sense of the experience being described. The phrase used to describe this practice is “purple prose.” He urges writers on their first editing pass to “look at every adjective and adverb and strike most of them out.”
Allston shared other advice during his workshop session — from the role of pacing to balancing exposition with dialogue to tell a story memorably. He advises writers to match the length of description to what their character sees.
He also says that you can fill in descriptive passages later after the first draft is crafted.  “Backfill motivation, description and foreshadowing. Vastly limit adjectives and adverbs. Participles are not good. Use active verbs. Keep it simple. Keep it short. I am for transparency – don’t be too stylized.”