Writing Tips from the Masters: Part I of My DragonCon Wrap Up

0
A Conversation with the First Ladies of Fantasy
05 September 2012
September 4, 2012 by icreateatl in Writing Conferences 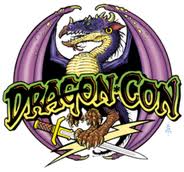 I am still in recovery mode coming off the high of DragonCon 2012, which drew more than 60,000 SF and fantasy fans this weekend to downtown Atlanta.While the “people watching” at the world’s largest fantasy/SF convention never disappoints, the real highlight for me is hearing from leading storytellers today in these genres.
Panels that stood out for me this year were a Young Adult (YA) author panel that discussed The Hunger Games’ journey from paper to screen, a “Creating Memorable Characters” panel, and a Saturday morning chat with the “First Ladies of Fantasy.” The Writing Well will be featuring highlights from these sessions in my expanded DragonCon wrap-up coverage starting tomorrow.

I also met one of my childhood heroes — actor and writer Richard Hatch, who played the character, Apollo, in the original “Battlestar Galactica” TV series and who first brought the story forward 20 years into the future with his novels.  Richard was a fount of information and inspiration for the writers in the room.

“Great writing is like great drama – being in situations where you don’t know what the solutions are,” says Richard, who urged us to get out of our heads and “tap into the deeper well of creativity.”
“Do you know how many artists paint, write, and it’s wonderful but nobody gets it. I think the art of the writer is to take something complex – something profound – and find a way to translate into a language that is understandable by people on a number of levels.”
Case in point: the film, “The Matrix,” could be enjoyed as an action flick on its own merit, but it also offered something else to others who could delve into the deeper aspects of the movie.
“When you have the ability to communicate on multiple levels, you really have found that art form that is the art form of life – it’s really what leverages you into the marketplace,” Richard says. “The greatest joy you will ever have is sharing your work with someone who gets it. You have to have the courage to step up to the plate, de-cloak, become visible, and share your work.”
My biggest time investment was attending several one-hour writing workshops taught by talented SF novelists, Aaron Allston and Michael Stackpole.

In his “Talk to Me” dialogue workshop, Aaron advocates establishing a distinctive voice to your character so that readers will know the character without you having to use attribution. You can accomplish this by repetitive use of language patterns in how the character speaks, and even through unattributed dialogue. You can also do this through punctuation, by having your character end a sentence as a question.  “You want as much unattributed dialogue as possible – it shows your proficiency as a writer,” Aaron says.
A sudden change in how your character speaks lets the reader realize that something has changed or is about to change. “Always be aware of what your character’s normal vocal mode is and deviate from it to get impact,” he says.
If you think your dialogue is going on too long, set their manuscript aside and come back to it with fresh eyes later, advises Aaron. Generally speaking, action scenes should have shorter dialogue while “sitting” scenes can be longer.

One pointer from Mike Stackpole’s Writing Rules session that stood out to me was “don’t rewrite before you finish writing.” How often do you find yourself self-editing mid-chapter or even mid-page? For me, plenty! Mike urges you to avoid that practice and just get your story down first. If you have a question in the area of research, highlight it in yellow –you can always go back and fill in those details later.  “Never take the easy way out – have characters change or grow due to their experience. Readers have to connect with them,” Mike says.
I found his session, “Writing a novel in 21 days,” amazing. The session included 21 exercises that address all the major building blocks of your story – the first 11 days focus on characterization; the next four days deal with world building; and the subsequent days focus on plotting. At the end of the 21 days, you have an outline from which to write your book.
“Every single word you put down is one word closer to the end,” Mike concludes. He advises you to keep chapters short – targeting 2,500 words and then “get out.” His reason? It keeps readers turning the page. Novels are approximately 100,000 words, while digital books are 50,000. You should also focus on three viewpoint characters not any more given the target book length.
“Speed is not important – every writer writes at a different speed. As you write more, you will get faster,” he says.

The final workshop I attended on Sunday was Aaron’s 13 sins that clog your plot.
Whether the culprits are issues of preparation, characterization, plotting or writing, the outcome is the same: “your characters stop interacting with you,” he says.
Common culprits that stall a plot include not doing your research, not laying out the rules of your story, or leaving out an essential ingredient, such as writing characters that your readers can’t get behind or villains who aren’t identifiable to readers.
“Conflict is also important – a novel without a conflict is kind of like a novel without readers,” he says.
Two major plotting sins are setting up a situation that is too simplistic that leads characters to interact in very predictable ways, and plotting with what Aaron calls “Styrofoam peanuts,” or relying on overused plot twists that are cliches.
The most memorable of his sins was #13 – being unwilling to abuse your characters as your plot demands.  “You have to be willing to inflict pain on your characters.” Growth only comes with pain.