0
Combating the Darkness: Inside the Writing Process of Multi-Bram Stroker Award Winner Jonathan Maberry
31 October 2015
September 22, 2015 by icreateatl in Inspiration 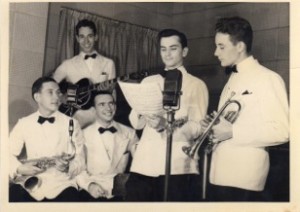 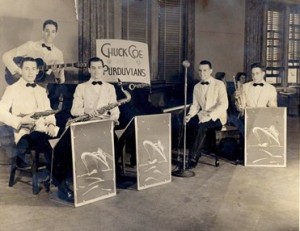 Last week, he received a lifetime entertainment award from Second Wind Dreams®, a non-profit devoted to granting a dream to those living in eldercare communities or in hospice care. The organization, begun in 1997, has fulfilled more than 10,000 dreams nationwide since its founding. 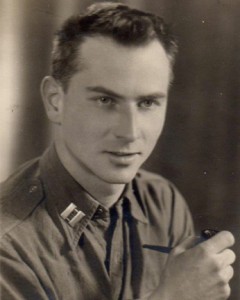 k, a World War II vet and graduate of Purdue University, earned his way through engineering school as a band leader and musician, playing clarinet, flute and saxophone. His group, “Chuck Coe and the Purduvians” performed at dances and special events, and even made three cruises to Europe and back entertaining passengers. When the war came, Chuck served as an Army captain in the 2nd Armored Division’s Hell on Wheels, where he was part of the D-day invasion + 3. He was head of communication for the battalion, making sure all the radios worked.

I could feel the love and regard for Chuck as residents, staff and family members came to pay their respects at his assisted living home in Roswell. His three children and their spouses were on hand, as well as my husband and our two kids, who are his great-grandchildren.

“Wow, sure appreciate it,” said Chuck, after receiving the award.

Sue Hamilton, the healthy lifestyle coordinator for the facility, planned and executed the entire event, serving as liaison with Second Wind Dreams and securing entertainment. She  hugged Chuck and showed everyone a lamp he fashioned from his old clarinet.

She then introduced Amber, who transported everyone back to the big band music of the 40s, kicking off her tribute singing Billie Holiday’s “What’s New?” before delving into countless Glenn Miller tunes.

Linda Coatsworth, Chuck’s youngest and a hammered dulcimer player, said she was so happy with how the event went. “We weren’t real sure how well he was going to do with a surprise, but I think he’s done quite well for 99 and a half.” Added Linda: “What’s so wonderful about this event is that dad was able to enjoy the tribute, whereas these kinds of tributes usually happen after the one honored has passed.”

Asked what she is most proud of about her dad, Linda said, “His example – to stay calm, don’t get excited. I don’t think I ever heard him raise one loud voice to mom in his 75 years of marriage to her. He’s such a role model.”

Carol, Chuck’s oldest, who plays the piano as well as the hammered dulcimer, said, “Seeing the good in others and being grateful no matter what,” is the quality of her father that stays with her the most. “It’s cute that the people who work here say he is so special to them. They would like him for a father if I would share him.”
Carol was only two years old when her father went off to war, and was in kindergarten when he returned. Her brother, Larry, was just an infant when he returned home.

“I remember when he came home after the war. We had this little house in Lafayette, Indiana, and he had his uniform on and just stood there. Mother said, ‘This is your father. He’s going to live here,'” recalled Carol. “ 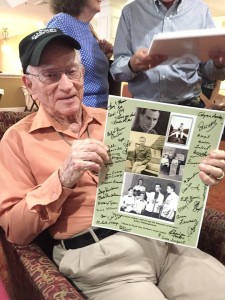 I was somewhat stunned. He was so peaceful. He smiled, he went out in the backyard and saw trees, bushes and grass, and he just looked like he landed in heaven. That was how I remembered really, really knowing him.”

Larry, who bears a strong likeness to his dad, told me that Chuck never spoke much about his experiences during WWII. He followed in his father’s footsteps as an engineer but didn’t take his career advice. “He advised me to not go to work in the steel business, but I did anyway.” Larry said, chuckling. “I remember us working underneath a ’47 Buick, rebuilding the engine. He had a cigarette in his mouth and ash about that long coming off the end of the cigarette until it finally fell on his face.”

I caught up with Amber after her music performance concluded, and she shared that this was the first time she ever performed Big Band songs for someone. “This was fun for me because this is the music I sing in my car, the music I love and that I’ve been singing for years and years.”
Amber explained that Chuck told her he played the saxophone and the flute and pretty much any woodwind in his orchestra. She notes that all the Big Band songs have a specific order– first you sing two verses, then a chorus, and then there is a dance break before you come back to do a chorus again.

“During the dance break you’re almost always have a piano solo or more often than not, a woodwind solo. So, I could imagine Chuck standing up during the dance breaks to play his solo saxophone. When I was putting the set together, that was what I was imagining.” 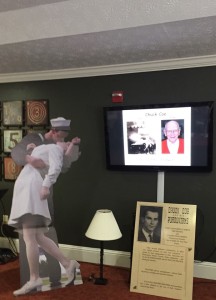 Doreen Scascitelli, CEO of Second Wind Dreams, seemed visibly moved by Chuck’s response and the outpouring of people at the celebration. “Seeing the community come out and everyone supporting him – that’s the principle   this organization was founded on. It’s not just the dream – it’s actually about unity and everyone being involved in the dream, from the people who provided the champagne to the people who provided the cake, to the person who did the poster. The dreams, whether they are simple or sublime, all have an amazing meaning for the elder and for the community.”