Looking ahead to 2011, the outlook for the communications profession remains bright, according to a panel of thought leaders speaking Nov. 22 at the final IABC Atlanta monthly member meeting of the year. 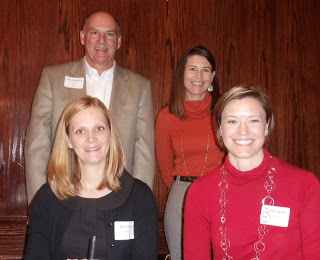 The packed meeting included a large contingent of students from the IABC student chapter at University of Georgia’s Grady College of Journalism and Mass Communication.

Ken Boughrum, a 25-year communications strategist who runs TUNE Communications and spent most of the past decade at PR agency, Ketchum, noted that the communications profession is finally making a metamorphosis, moving away from being an “information distribution business to being in the business of influencing the business. That really happens by establishing a relationship with all of an organization’s stakeholders whether it’s through social media tools or using tried-and-true methods,” he said.

All the panelists stressed the impact on social media on the way they communicate externally and internally to key groups.  “The cool thing about being in the communications function is we get to shape that dialogue,” Boughrum said.

Lauren Jarrell, director of communications for the Atlanta Convention and Visitors Bureau, noted that the hospitality industry has always relied on deep connections with partners and customers. Social media (check out Twitter feed) “gives a louder voice to the message shaping we’ve been working on for years.” Jarrell added that the ability to communicate so quickly and so often is also exciting because it allows her team to leverage people who are influencers and who are most passionate about her organization’s “product” — Atlanta as a destination — to serve as voices to key audiences.

Sara Pilling, marketing director for PGi, a global application software and services company that enables real-time, virtual meetings, says social media has allowed has given her PR team new ways to tell her company’s story well. “A lot of casual tone and the approachability of influencers now give us a great opportunity to have a much closer dialogue.”

While digital technology’s influence is evident everywhere, audiences still need strong storytelling. Boughrum agrees: “A good story, well told, trumps technology any day. Yes, there are so many channels to tell you story, but at the core it’s still about the story.”

As communicators get better at demonstrating the impact of digital and new media tools, you can gain executive buy-in and ultimately more followers.

Measurement is a big part of Debbie Curtis-Magley’s job at UPS. As corporate public relations manager, she works closely with colleagues in Customer Communications, HR and Employee Communications on several social media efforts, including content for the UPS blog, upside. Curtis-Magley describes her role as part communicator and part “data nerd.”

“The data has been helpful for us in building the business case about the importance of our participation in these channels,” she said.

Several high-profile events affected UPS’s brand in the last year, from a plane crash to the discovery of suspicious packages originating in Yemen found on UPS and FedEx planes.  Curtis-Magley also recalled following the Haiti earthquake, a rumor circulating on social media sites mentioned that UPS would ship packages under 50 pounds for free to Haiti. “People didn’t check our website to see that we had suspended service to the country in the wake of the earthquake,” she said.

Curtis-Magley analyzes online chatter, enabling UPS to connect data to the stories and better understand which stories caught the interest of a wider audience, and which stories had shorter or longer life cycles. UPS’s PR team also generates quarterly reports on key business topics, to see the impact of the company’s messaging and to better understand the sentiment around conversations around the brand.

“It’s allowed us to show some progress in the areas of customer service and environment,” she said. “We’ve been able to provide a lot of numbers to whatever situation we encounter and it’s enabled us to provide business intelligence. Whatever group has an interest, we are able to provide some data that they now connect to the business reality (of the situation being measured).”

Trust Rising, According to Edelman

Employee engagement in telling an organization’s story will continue to grow in prominance among forward-thinking companies. Great examples of this approach are IBM’s Smarter Planet campaign, which offers a succinct global message that resonates with audiences, unifies IBM staff and celebrates the employee, noted Boughrum. He also cited Cisco’s Human Network and Intel’s Rock Star Sponsors of Tomorrow TV commercial, featuring Intel ‘s co-inventor of the USB being treated as a rock star by colleagues.

Curtis-Magley said that with more than 400,000 employees, UPS has a rich source of compelling stories from drivers who make deliveries to other staff, who have stories to tell that people are “interested in hearing.” “It humanizes the brand and shows we’re a company made up of people just like you,” she added.

Concluding the discussion, panelists offered the following resources for communicators who want to stay ahead of trends in social media and communications in 2011:

Web Strategy by Jeremiah Owyang  Since 1996, this blog has delivered insight on disruptive technologies and their impact on how companies communicate with their customers.

Forrestor blog, Groundswell  — This blog targets readers interested in social applications and technology empowerment inside and outside companies. Its written by two Forrestor analysts –Josh Bernoff, co-author of the BusinessWeek bestseller Groundswell, who serves as senior vice president, idea development, at Forrester Research, and Ted Schadler, vice president and principal analyst in Forrester’s IT Research Group.

Website — Harvard Business Review – Working Knowledge – an early look at faculty research to help communicators stay ahead of the curve of what’s coming in academic research.

Book — Drive by Daniel H. Pink — addresses the secret to high performance and satisfaction—at work, at school, and at home—namely, the deeply human need to direct our own lives, to learn and create new things, and to do better by ourselves and our world.