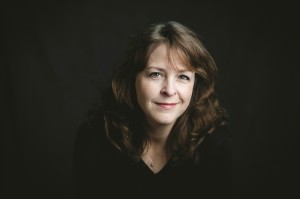 Tracy Groot, a Michigan native, found out early she loved to write.  But it’s the topics she’s tackled that make her so intriguing:  faith and finding your moral center against the backdrop of history.

“I am drawn to stories with a lot of darkness in them, because I want to find out where the light shows up,” says Tracy.

Her debut novel, The Brother’s Keeper, based on a play she penned, explores the story of James, brother of Jesus.  Later, she tackled another Biblical story in Madman, a story about the Gerasene demoniac.  After signing with Tyndale Publishers, she found her niche: writing stories set against historical events—“the small hinges, Winston Churchill once said, upon which history turns,” as she describes it in her author bio. In Flame of Resistance, she weaves the Biblical story of the prostitute Rahab into a tale of a young French woman who survives the Nazi occupation of France.

In her latest book, The Sentinels of Andersonville, to be released Feb. 1st, Tracy delves into the infamous Confederate prison where 13,000 Union soldiers perished in only fourteen months. In this riveting retelling of a tragic chapter in the Civil War, three young Confederates and an entire town come face-to-face with the prison’s atrocities and learn the cost of compassion, when withheld and when given.  The book has already earned high praise from the likes of James M. McPherson, who calls it “a poignant, heartwarming story of how human kindness and the willingness to take risks can make a difference.”

Below, she talks about her journey to Andersonville and her own discovery of what it meant to be a southerner at that time. Tracy also offers her own view of the state of publishing and being a writer today. Reach Tracy on her website or connect with her on Facebook.

Q. What inspired you to write The Sentinels of Andersonville?

I saw a movie when I was a kid called The Andersonville Trial, directed by George C Scott. I was horrified to learn that donated food had been turned away and I wanted to find out why.

Q. Do you have an interesting Civil War family history?

Q. What did you find most challenging about this story compared with your earlier books?

To write accurately from a southern point of view, I needed to understand what independence meant to a southerner. Searching to understand that was critical to the story. I was also challenged to get the details right for Andersonville prison, because this is a piece of our American history.

Q. Which character do you most identify with? Why?

I identified with so many, but in my heart I’d have to say Dance. Why? Because he was judging others for what they were not doing and I sometimes do the same.

Q. I know research was an important component to making this story authentic and for my part, I found your recreation of the horror inside this overcrowded and disease-ridden place raw and haunting. What was most helpful to you in the research phase? Anything surprising or unexpected emerge?

The most helpful were the original accounts of the prisoners through diaries, letters and writings

featured in various historical documents. I wanted to go directly to the sources. I read through over 100 of these sources and the amazing thing is that these and many more are still out there. Several history books about Andersonville were also very informative, as were documentaries and film. A few unexpected things emerged.

Q. A major theme of your story is the role of individual action – doing something, no matter how small, to help those in need can make a difference. Do you think that is a message that has relevance today?

With all my heart. We have a shopping cart in our foyer at church where folks can put something in to help the needy through the Food Pantry. Every week I have an opportunity to put something in that cart to help someone out. Since writing Sentinels, I don’t miss that opportunity—and I no longer get annoyed if I think others are not giving or don’t care; I make sure that I am.

Q. Any advice to aspiring historical novelists given all the changes in the publishing industry?

Q. What is your view of traditional versus self-publishing, the role of agents, the importance of social media, etc. What should writers do to find an audience for their work?

Everyone’s publishing story is going to be different. For some, traditional works, for others, self-publishing is the route to go.  Same deal with agents. Given the state of the publishing industry today, I don’t think there’s a wrong or a right way to do things. You have to feel your way, find your way. The number one thing a novelist must do, the new non-negotiable, is to stay connected with social media. These days, an author is both novelist and bookstore and there’s no getting around it. For myself, I give a certain amount of time to investing in social media daily, and call it good. People need to know your book is out there. Goodreads and other book sites do that. Of course, the most important thing to do is make sure you have something to market; write a good book. All starts there.