Prev
1
Book Review: Are You a Modern-day Queen Esther?
20 September 2010
Next
0
Independence has its Rewards
26 October 2010
September 24, 2010 by icreateatl in Corporate Communication 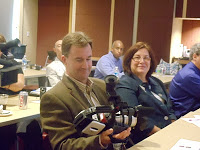 Turner Broadcasting’s team of new media production, photography and communications experts provided ample advice at the IABC Atlanta’s Technology Special Interest Group meeting this week.  Walking the talk, the Turner folks not only provided different examples of videography equipment for us to see and handle, but also they streamed the meeting live — capturing the presentation and Q&A from attendees using handheld flip cameras, while encouraging those of us present to the do the same.
It was an information-packed few hours on Turner’s campus as we learned the best techniques and tools for doing web-based video storytelling. I was the first one to ask about lighting– a key concern of mine as I have been accustomed to the painstaking lighting set ups from professional shoots in my years in corporate communications.
“The web is more impactful with tighter shots,” noted Dennis Bassarab, Emmy-award-winning videographer and director of photography for Turner Studios. Bassarab advised us to remember that a person’s eyes can capture an image much better than the sensor in any camera.

“There are some simple lighting paradigms – your foreground should be brighter than your background; you try to get lighting that is pleasant and fills the face out. Not harsh lighting – you don’t want to see shadows in the background.”

If you have a flip camera, the first thing you look for is where the light is coming from. If there is a window, you open the blinds and let the natural light hit your subject. “Nature is your light. Use that. If you have overhead fluorescents – they’re not great, but you can use a white tablecloth over a chair or some kind of reflecting material to bounce light in. Use your desk lamps – those are great because they’re low,” Bassarab advised.

David Broyles, manager of Technical Operations, whose role includes overseeing Turner’s Digital Media Group and the DVD Authoring Group, reiterated that editing and encoding video depends on what you have to work with – namely, “good lighting and good audio.”

To Stream or Not to Stream?

David Kennerly, manager of New Media Production & Development, said one of the big things you need to decide is how do you want to capture video – by streaming it live (which requires compression) so people can watch it on demand, or to capture and encode it at your computer later? How you answer will dictate what technology you use. Encoding for streaming is ideally at 750 kpbs, although 500 kpbs is also good. Kennerly recommends dual bit rate streaming where you have two streams (one at 500 kpbs and one at 200 kpbs).

Turner is moving to the Flash format for all their video compression (in fact, 30 percent of all video files are Flash). The H.264/MPEG-4 standard for video compression is where the industry is headed, the Turner officials said. Not surprisingly, Windows Media Player is among the most prevalent players used on the market today.
Quick Time Pro got high marks for supporting MPG-4 formats and affordability. Others referenced included Premiere, Final Cut, Media Composer and Sony’s Vegas Pro.

What You Need to Get Started

If you want to do inexpensive live video on the web, Kennerly advised that you buy a DV camera with a FireWire output and a laptop with a FireWire input. You also need to open an account with Livestream or Ustream (Livestream offers an option to stream to iPhones).

Kennerly said there are also ways to create more professional video streams. On the low end, you can transmit video using a digital DV signal over FireWire directly into a laptop. He described this approach as “a clean, easy way to capture live video for streaming to sites like Ustream or Livestream.” Another option is to use an analog signal over RCA (red/white/yellow) through an external “Break Out Box” like a Pinnacle FireWire or USB capture device. This method is effective to get live video out of most vcameras, including older ones, into almost any computer with a USB 2.0 port. It also comes with software for editing and creating titles.

“Don’t forget webcams and internal cams in laptops for ‘talking head’ type scenarios – if you light well and get a decent microphone, this is an increasingly acceptable, inexpensive way to go,” he said.

In the mid range, you can use a capture card installed in a PCI slot inside your PC, like an Osprey 230 or 300. Kennerly noted that this option is a good way to capture higher-quality video, and the card comes with some cool software that gives you options for overlaying logos on your video. Alternatively, you can invest in a higher-end external FireWire device such as the Canopus ADVC-110.

Encoding Software
At this point you will be ready to encode software for live streaming. Kennerly pointed out that sites such as Ustream, Livestream, and Justin TV “offer their own proprietary encoders that are good for small, homemade shows, and they offer some flexible options.” He said you can stream for free if you can tolerate the advertising. “These sites also act as your video server and CDN (content delivery network) – they are very good options for getting live video on the web quickly.”

You have a number of media encoder options beyond those proprietary options. For instance, Windows Media Encoder 9 is a free download from Microsoft. A positive of that encoder is viewers can watch a stream simply by clicking on a link, and WME offers lots of production tool, while a negative aspect is that some Mac users have trouble viewing WMV streams.

Flash Media Encoder 3.1 is a free download from Adobe. Kennerly said a plus for Flash is that it is easy to view for Windows and Mac users, and is now viewable on Android devices. On the negative side, Flash files are difficult to edit (offering very limited production tools). In addition, viewers have to watch Flash in a player embedded on a web page, or in a player like VLC.

Running your own video server, continued Kennerly, can be difficult unless you are very tech savvy, but Windows and Flash both offer good media servers.  A plus — running your own server is good for small viewing audiences. A negative — viewers will be reaching in and “touching” your server, so you can’t reach large audiences without crashes. Getting an account with a Content Delivery Network (CDN) is the best solution for serving live video to large audiences. SimpleCDN is an inexpensive CDN, while bigger CDNs like Akamai, Limelight, and Highwinds offer many packages and services. Peer-to-peer streaming services such as Octoshape are an increasingly relevant way to deliver live video.

Embedding Video on the Web — HTML Skills a Must

The Turner speakers also recommended the following online resources to learn more and to get tips on video shooting for the web:

• CreativeCow.com —  a great place for novices and experienced video creative people
• B&H.com – for excellent deals on cameras and other products
• Cinematography Mailing List, or CML— a free exchange of ideas with 16,000 members strong where you can gain access to some 20 different lists by specialty area