One hundred years ago today, my hometown experienced its worst-ever natural disaster. On March 25, 1913, unprecedented storm systems and resulting rainfall caused Dayton’s Great Miami, Mad and Stillwater Rivers to flood, laying waste to the city. Some nine to 11 inches of rain fell from March 23-25 on ground already saturated from an early spring thaw.

By the time the waters — which reached as high as 24 feet in some areas — receded a few days later, more than 360 residents and 1,400 horses and mules had perished. Entire blocks were decimated from water and out-of-control fires. The region’s losses totaled $100 million, or more than $2 billion in today’s dollars.

In yesterday’s Dayton Daily News Sunday feature marking the centennial of the flood, columnist Mary McCarty observed that the flood is “part of the region’s DNA, an unforgettable event that forever stamped Dayton as a place where greatness can happen.”

My grandmother, Emma Wainscott, was only five years old when the flood waters swamped her family home on Van Buren Street. Within hours, the house took on 13 feet of water, leaving the family marooned on the upper floor of their two-story home. She watched as men in NCR flat-bottom boats rescued her elderly neighbor from an upstairs window. Before it was over, National Cash Register had built 300 boats used in rescue efforts. My grandmother’s recollections inspired my soon-to-be completed novel, Torrential.

My narrative opens on Good Friday, with a group of Dayton boarding house residents living on Van Buren Street (an area known today as the Oregon District). 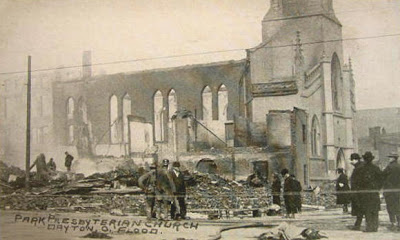 Patterson, a man who knew about Dayton’s tendency to flood from his youth collecting tolls for the Miami and Erie Canal, galvanized his factory into a massive relief operation. His quick actions saved the city from an even more significant loss of life. Patterson had a lot on his mind that spring — five weeks earlier he and other company officers had been convicted of Sherman anti-trust violations and faced a year of jail time.

I began my book research last spring when I stayed in the Oregon District, a block from my grandmother’s childhood home. In addition to a visit to NCR’s Historical Archives, I interviewed the chief engineer at the Miami Valley Conservancy District, one of the U.S.’s first major flood-control districts and the brainchild of Morgan.  I have since interviewed two of his grandchildren, including Faith Morgan, executive director of the Arthur Morgan Institute for Community Solutions. She described her grandfather as an avid outdoorsman with a strong sense of right and wrong, who analyzed problems from all angles.
“I remember him saying he had been to Europe, looking at the high water marks of prior floods. It took a long time for him to study what to do about the problem — I think 15 years. He was deliberate but creative.”

Sarah Jamison, a Cleveland-based National Weather Service meteorologist, detailed for me the rare weather systems that converged to cause the widespread flooding on that long-ago Eastertide. She noted that on Good Friday a severe wind storm with gale-force winds hit Dayton from the Great Lakes.

“By Easter Sunday people were thankful that they had a roof over their heads.” But, then the rains came, and about six months of runoff fell in a few days.  “The ground couldn’t absorb anything after a while,” says Jamison. “The conditions that formed that rain event were not completely unprecedented – it certainly could happen again.”

Many people today don’t realize that back in 1913, there was no flood insurance or FEMA. Americans hated the idea of accepting charity, as noted by NCR employees who rejected Patterson’s offer of a free hot lunch; they insisted on paying for their meal.

Within ten days of the disaster, Daytonians, many reeling from their own losses, raised $2 million for a flood prevention fund.

When the American Red Cross arrived on the scene to help care for the stricken residents, staff were so impressed with the city’s dignity and perseverance that they lowered their flag as a sign of respect.

Torrential carries readers through the flood and the rebuilding of Dayton, including the remarkable work of  Morgan. At its essence, Torrential is a love story — told through the eyes of two main characters — Hannah, the boarding house’s eldest daughter, and Kieran, an Irish boarder working for his uncle at NCR’s Wood-Working Department. Along the way, another kind of love story has emerged — one of a city’s indomitable spirit in its darkest hour.
___________________________________________________
Anne Wainscott-Sargent anticipates completing her historical fiction novel, Torrential, in 2013 and will be seeking a publishing home for the book. Check back at this blog often for details on her experiences bringing Dayton’s worst natural disaster to life on the page.