A Conversation with Carolyn Poling Schriber, Author of Beyond All Price

Prev
0
Putting the Creative into Corporate Communications
12 October 2011
Next
5
Pulitzer Prize-nominated Author Jedwin Smith Talks about the Re-release of His Family War-time Memoir, Our Brother’s Keeper
15 April 2012
March 22, 2012 by icreateatl in Author Interviews 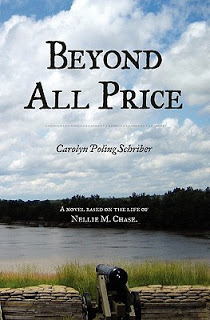 Union nurse Nellie Chase was known by Civil War soldiers as the Florence Nightingale of her time — a driven young woman who overcame personal hardship to serve her country during its darkest hour.
In Beyond All Price, author and historian Carolyn Poling Schriber captures Nellie’s spirit and struggles, letting us experience what it was like to be a Union nurse and a woman during this period of our history.
Here, Schriber shares with The Writing Well the challenge of transitioning from biographical writing to historical narrative, the one insight she wish she’d had before she started writing historical fiction,  current books she’s reading, and what’s next for her in the realm of historical storytelling.
Q. What is the biggest challenge as a writer to go from crafting biographies to writing an historical novel of someone’s life?
Schriber: For me, the biggest challenge was transitioning from writing scholarly historical monographs to writing a novel based on historical fact. I was trained to look at every detail, to explore every source of information, to document every quote or paraphrase. As a historian, if I couldn’t prove something, I couldn’t say it.  As a novelist, if I couldn’t find out what happened, I had to be able to create a plausible alternative. The first few times I had to make an educated guess were painful. The guilt faded; however, as I discovered how much fun it can be use imagination when facts fail.
Q. I read that there was very little known about Nellie Chase’s life. Chronicling her life must have been a challenge.

And next on my “to be read” list is Sharon Kay Penman’s new book, Lionheart. My favorite book of all time is Remembrance Rock, by Carl Sandburg. He managed to tell the entire history of the United States in chapters that trace one family’s generations, as they experience and influence the important events of their times. What do those books all have in common? They are written by authors who know and respect the history about which they are writing.
Q. Are you working on a new book? If so, can you share some details?
Schriber: I’m now working on another historical novel, The Road to Frogmore, which tells the dual stories of a slave woman and a Philadelphia abolitionist, Miss Laura Towne, who together faced and conquered the challenges of emancipation. Like my previous books, it is set in the Low Country of South Carolina during the Civil War.  With luck, it should be available in October.
Author Bio:
Carolyn Poling Schriber received her PhD in History from the University of Colorado, where she studied medieval Europe and 19th-century America. She was a tenured professor at Rhodes College, specializing in medieval history and publishing extensively on relationships between Anglo-Norman bishops and kings in the twelfth century.  She established and edited an early (1995) resource website for teachers of medieval history.  ORB (The Online Reference Book for Medieval History) continues as a prime reference site under a new editor.  After retiring with Professor Emerita status in 2004, Schriber turned her attention to her second love, the history of America’s Civil War.
The books Schriber has published since retirement have moved away from scholarly fact-finding to human interest. A Scratch with the Rebelsand Beyond All Price have both been set in South Carolina during the northern occupation of the Low Country. A Scratch with the Rebels, although non-fiction, illuminates the depth and diversity of perspectives from ordinary soldiers — one a Pennsylvania backwoodsman, the other a Presbyterian minister’s son from Charleston, SC — on opposite sides of the Civil War.
Beyond All Price, Schriber’s first historical novel, tells the story of Nellie Chase, who served as matron and nurse in the Roundhead Regiment from Pennsylvania. Nellie fought her own series of wars, against an abusive husband, against a vengeful Presbyterian minister, against nineteenth-century attitudes toward women who lacked the protection of family status, and ultimately, against a foe more lethal than war itself.
Schriber’s most recent book, The Second Mouse Gets the Cheese, originated as a series of blog posts written as Schriber struggled to find her own way through the “thickets of self-publishing.” The lessons she learned along the way helped her to win two separate book awards and to find herself listed among the top 100 Amazon bestsellers in Historical Fiction. The advice in the book is her way of paying it forward to other new authors.
Schriber now lives near Memphis, Tennessee, with her husband Floyd and five companionable but opinionated cats.
Read Schriber’s Roundheads and Rambling blog at Katzehaus Books or her book-writing blog,  On the Road to Frogmore.