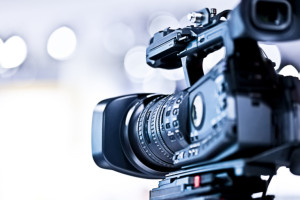 A 30-year, regional Emmy-award winning TV correspondent and documentary producer, Russ Jamieson knows how to bring the magic of words to the video medium. Considering that the growth of webcast traffic has roughly doubled, year on year, since 1995, Russ’s video prose insights have great relevance to communicators.

Below, he shares his Top 10 Broadcast/Webcast Writing Tips.

1. Focus on your audience

“The more prep you do, the better the interview script – and story – will be.”

“Talking heads are generally not that interesting unless they say something profound, so keep your soundbites short.”

5. Write around your “nuggets”

“I know what my story is, I pick the best video nuggets to lead it off with and then I use soundbites to emphasize or punctuate aspects of the story.”

6. Marry the video and words together

“If you have great pictures or video then let it have its impact – words move to the background.”

7. Use music and natural sound

“It can really help convey a mood. Sometimes you can use natural sound to bridge to the next part of your story.”

“Don’t assume that first script is perfect – always go back and make your story better. After about 10 years I became very, very good doing two-minute stories. But that’s an acquired skill because I was doing it every day, three times a day.”

9. Read your script out loud – or have someone else read it out loud

“Even though you may have done a 20-minute interview with this expert, only one-tenth of that interview is actually aired or web-casted. Particularly in TV, you make the assumption that the story you craft reflects only the most important things your audience would come away with.”

Russ has been involved in television and/or radio nearly all of his life. Upon graduation in 1976 from the University of Missouri School of Journalism (BJ), he was immediately hired as News Director for KTGR/KTGC AM/FM, in Columbia, Missouri. Russ then spent 13 years with WAGA in Atlanta as a general assignment reporter and three years with CNN Southeast as a freelance correspondent. For the last decade, Russ and Jack English have been partners in Broadcast Solutions and Southeast Stockfootage, producing and delivering content for Georgia Public Broadcasting and corporate clients. In 2008, Broadcast Solutions produced, shot and did the fund-raising for the Telly Award winning High Definition Documentary, “The South Takes Flight”. Southeast Stockfootage is the largest High Definition aerials library in the southeast serving the film, video and television industry.