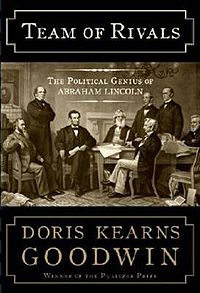 The Writing Well is devoted to book reviews or recommendations every Sunday in May. Last year for Memorial Day I paid tribute to “Three Must Reads of the War-time Experience:”

The post included book excerpts and author interview clips. With tomorrow being Memorial Day, I wanted to feature a work that memorably speaks to our national story. 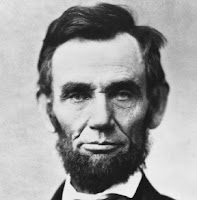 One book emerged as an easy choice: Team of Rivals: The Political Genius of Abraham Lincoln.
Written by Pulitzer Prize-winning author and acclaimed historian Doris Kearns Goodwin, the exhaustively researched biography has been called “a brilliant portrayal of our best president” and “the bible of the Civil War era and of Abraham Lincoln.” I couldn’t agree more.

Kearns Goodwin spent 10 years researching and writing Team of Rivals. She does a masterful job retelling the story of Lincoln’s unlikely rise to president and his gutsy decision to surround himself with his former rivals — William H. Seward, Salmon P. Chase, and Edward Bates after winning the 1860 Republican nomination. This excerpt, set on the morning of May 18, 1860, the day of the Republican nomination, perfectly captures the view of Lincoln as the undisputed underdog:

“There was little to lead one to suppose that Abraham Lincoln, nervously rambling the streets of Springfield that May morning, who scarcely had a national reputation, certainly nothing to equal any of the other three, who had served but a single term in Congress, twice lost bids for the Senate, and had no administrative experience whatsoever, would become the greatest historical figure of the nineteenth century.”

This work offers a rare glimpse into our 16th president, showing Lincoln’s ability to put himself in the place of other men, to experience what they were feeling, and to understand their motives and desires. The new president deliberately surrounded himself with individuals from differing political leanings and ideologies.  In the process, he earned the respect and devotion of his former foes.

A key player in the book is Edwin B. Stanton, who treated Lincoln with contempt  the first time the two crossed paths — during a celebrated law case in the summer of 1855. In spite of Stanton’s demeaning behavior, Lincoln offered him the most powerful civilian post –that of secretary of war– when they met again six years later. Stanton was Lincoln’s closest adviser during the Civil War and at Lincoln’s death, he uttered the famous words, “Now he belongs to the ages,” and lamented,”There lies the most perfect ruler of men the world has ever seen.”

The popular press took note of President Obama taking a cue from his presidential idol when he embraced former political foe Hillary Rodham Clinton as his Secretary of State. Business leaders are constantly speaking to the need for creativity and specifically, diverse ideas, to drive success. Clearly, Lincoln intuitively knew a leadership principle that offers lasting lessons to our often-polarized business and political world.

Watch Jim Heath’s interview with Kearns Goodwin about Team of Rivals.  During the interview, she talks about why Lincoln is her favorite president and her view of “Lincoln,” Steven Spielberg’s upcoming film adaptation of her book. Spielberg pledges that the film will be released after the 2012 presidential election. Daniel Day-Lewis will play the lead role. Other cast members include Sally Fields, Joseph Gordon-Levitt, and Tommy Lee Jones.

Kearns Goodwin has said, “Once a president gets to the White House, the only audience that is left that really matters is history.”

Thanks to her painstaking biography, the political life of our most remarkable president is clearly illumined.


More from my site