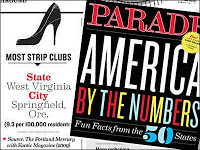 One guilty pleasure I have on Sunday mornings is reading Parade Magazine. The May 1st issue was devoted to “numbers” – one nation, 50 states, over 300 million people….and a lot of anecdotal statistics covering everything from how Americans spend their money to the states with the top physical activity, high school graduation rates and recent dental visits.

I learned that Miami Beach is the most tattooed city in the country, while Springfield, Ore., has the most strip clubs in the country (a surprise to me given Atlanta’s propensity for gentlemen’s clubs).

As writers, we often must cite statistics and other facts to make our point credible to readers. Numbers and facts do tell a story – and when used properly within the right context, can ensure credibility and readability. When used improperly, they can cause the opposite effect: confusion and quick dismissal of the content.

Andrew Dlugan, an award-winning public speaker, and the author of the Six Minutes Public Speaking Blog, blogged about this topic back in 2008, calling statistics provided without any meaningful context “naked.”

I agree with Dlugan that numbers are often too large to grasp by themselves – especially if your intended audience is more general (not technical). For your statistic to hit home with your readers, you need context – and the more personal or immediate the context for your audience, the better. He suggests you follow any number you cite with “which means…” to link the statistic to the context/explanation.

It’s sound advice echoed by Ann Wylie, author of more than a dozen learning tools that help people improve their communication skills. “Make your statistics more meaningful by comparing them to something tangible and familiar to your audience,” she urges in her 2009 post titled, “Take the ‘numb’ out of numbers.”

I often find myself dealing with “numbers” when writing “public health in action” features for a CDC website. When reporting on last summer’s Salmonellosis outbreak that led to the largest egg recall in history, I interviewed officials in California’s state health department and CDC’s PulseNet team. PulseNet is a CDC-managed, national network of public health and food regulatory agency laboratories that helps public health officials detect foodborne disease case clusters early on. One of the interviewees noticed the numbers of this type of Salmonella infection jump in late June:

“Normally, we’d see about 300 of these monthly during summer every year, but around the third week in June, we saw that number double,” the source stated. Her comment underscored how unusual this spike was in the context of a normal summer season where people reported foodborne-related illnesses.

It’s not hard to make stats real – you can simply add another layer of detail that puts the numbers into a common frame of reference.

Write: More Ohioans die from colorectal cancer than any other cancer except lung cancer. Some 6,422 new cases were diagnosed annually between 2002 and 2006.

Do you have examples of writing about numbers that worked? What about ones that missed the mark? Share them here!