Whether it’s to inform, entertain, unify or defend, speeches are a critical form of communication. Good ones  know how to grab and keep the audience’s attention, and great ones change thinking and inspire action.  This Memorial Day, I share examples of great patriotic speeches delivered here and abroad that made a lasting impact on the public during times of trial and times of healing.

Winston Churchill was among the great orators whose war-time speeches rallied both his country and the world. In his Suite101 post, Churchill’s Greatest Speeches, blog contributor Michael Rowland noted that Churchill’s “ability to motivate entire nations through the spoken word proved crucial in guiding the Allies to ultimate victory in World War II and saving Western civilization from Nazi tyranny.” 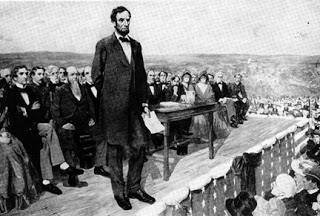 Voices.com offers these top 10 U.S. Presidential Speeches that transformed America that were given in times of war and peace. Topping the list is of course President Lincoln’s Gettysburg Address, which was delivered on Nov. 19, 1863, four months after the bloody battle, and was intended to honor the fallen on both sides, who “gave the last full measure of devotion.” The president also hoped to heal the country and unify it. Lincoln’s conclusion resolved “that these dead shall not have died in vain — that this nation, under God, shall have a new birth of freedom — and that government of the people, by the people, for the people, shall not perish from the earth.” 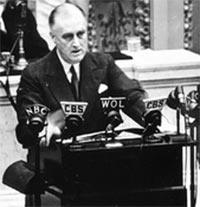 FDR’s famous Pearl Harbor speech following Japan’s premeditated attack on our naval forces in Hawaii rallied the country in a way that few speeches by U.S. presidents have before or since.  President Roosevelt words, carried over radio, began with, “Yesterday, December 7th, 1941 – a date which will live in infamy – the United States of America was suddenly and deliberately attacked by naval and air forces of the Empire of Japan.”

Toward the end of his speech, FDR declared, “No matter how long it may take us to overcome this premeditated invasion, the American people in their righteous might will win through to absolute victory.

With confidence in our armed forces – with the unbounding determination of our people – we will gain the inevitable triumph – so help us God.” 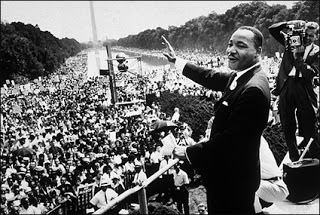 Martin Luther King, Jr.’s “I Have a Dream” speech delivered during the March on Washington D.C. in August 1963 was a defining moment in the Civil Rights Movement. In 1999, it was ranked the best speech of the 20th century in a poll of scholars of public address.

Rev. King urged America to “make real the promises of democracy,” saying, “I have a dream that one day on the red hills of Georgia the sons of former slaves and the sons of former slave owners will be able to sit down together at a table of brotherhood. I have a dream that one day even the state of Mississippi, a desert state, sweltering with the heat of injustice and oppression, will be transformed into an oasis of freedom and justice.I have a dream that my four children will one day live in a nation where they will not be judged by the color of their skin but by the content of their character.”

I conclude with a lesser known speech given on Memorial Day 1884 by Oliver Wendell Holmes, Jr., who survived the Civil War with three wounds as a member of the Twentieth Massachusetts Infantry. Holmes would serve 30 years as a U.S. Supreme Court justice. He captured the spirit of Memorial Day in these words of remembrance for fellow soldiers gone but never far from the hearts and memories of those left behind:

“But as surely as this day comes round we are in the presence of the dead. For one hour, twice a year at least–at the regimental dinner, where the ghosts sit at table more numerous than the living, and on this day when we decorate their graves–the dead come back and live with us.

“I see them now, more than I can number, as once I saw them on this earth. They are the same bright figures, or their counterparts, that come also before your eyes; and when I speak of those who were my brothers, the same words describe yours.”