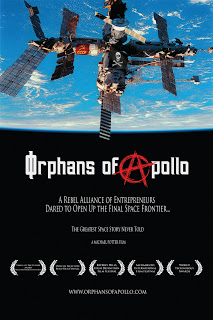 This morning’s launch of SpaceX’s Falcon 9 rocket from Cape Canaveral marks a new era in space exploration. SpaceX’s bold move to rocket the first private spacecraft to the International Space Station brings new inspiration to space entrepreneurs around the world.
I had the honor to talk with one of those space visionaries – Michael Potter, a founding alumnus of the International Space University, who I recently interviewed while writing a story for Via Satellite Magazine.
Potter brings a unique perspective to today’s events as the documentary filmmaker behind “Orphans of Apollo,” the extraordinary true story of a rebel group of entrepreneurs who seized command of the Russian Mir Space Station in what could be considered the boldest business plan the Earth has ever seen.
At the center of the film is ‘MirCorp’ — the very first entrepreneurial company to have a sole focus on the privatization of space with a fantastic vision of transforming the Russian space station into an outpost for what was intended to be the first phase of a trillion dollar business. The project was to include mining of asteroids, gravity-free laboratories, a space ‘hotel’, and a research facility. MirCorp was the ultimate start-up company.

“This film is an enthralling glimpse into space, and into the minds and hearts of people trying to get into it. Footage of rocket launches and of life on Mir is interspersed with interviews with the key players about the technical challenges, political wrangling, and business plans. We feel the excitement (and fear) of their project and get a sense of the mood in Russia and the U.S. after the collapse of the Soviet Union,” Janet D. Stemwedel, Ph.D., wrote on her blog, Adventures in Ethics and Science, soon after the film debuted.

Here, Potter talks candidly about the lasting dream of space born during the Apollo program, highlights while filming “Orphans of Apollo,” and the significance of SpaceX’s historic flight.
Q. Do you remember the Apollo space flights growing up? Was it a defining time, instilling in you a lifelong interest in space?
I was eight years old when humanity journeyed to the Moon. I was definitely part of the Apollo generation. Kennedy sold the world on the need for space exploration and development. And when President Nixon shut down the Apollo program, and the U.S. government gave up on the space vision and dream, my generation became, “Orphans of Apollo.”
Q. Why did you decide to tackle this topic in the form of a documentary?
Because, I was one-degree of separation from all the key players in the story, I felt an extra inspiration and responsibility for curating the story and bringing the story to the world’s attention. I felt that it was such an important and iconic story it needed to be told.
Initially, I introduced the story to a well known documentary filmmaker, who was interested, but was keen that I do all the heavy lifting. So, I decided to embark on the film as a complete independent project.
Q. What was the most powerful moment for you personally over the course of making “Orphans of Apollo?”
There were a handful of moments of profound Epiphany in the making of the film.
Q. This film has attracted quite a following in the academic world, within NASA and among space enthusiasts everywhere. What do you hope your documentary accomplishes?
One of the reasons for the following is because of the people who were included in the film, Elon Musk, Peter Diamanids, Richard Branson, Burt Rutan, Tom Clancy. Because of the media attention on the billionaires behind the project to mine asteroids, the attention on Richard Branson’s Virgin Galactic and the news coverage of SpaceX, there has been a strong interest in “Orphans of Apollo.”
I was fortunate, because many of the people on Obama’s space transition team saw the film. The film makes a strong case for the importance of unleashing the commercial power of the marketplace in the development of space. While the Administration has not developed a powerful, clear, and compelling strategy for the development and exploration of space, they have taken positive steps towards broadening commercial enterprise as a driver in space exploration.
Q. What lesson/challenge did you glean from this experience that would benefit other budding filmmakers?
The critical importance of a meaningful and quite dramatic story. I consider myself to be a filmmaker who focuses on issues about the future of all of humanity – a new breed of humanitarian filmmaker.
The power of social network film distribution is really important for new filmmakers to understand and to develop.
Q. Are you working on any other film projects? Do you have plans to tackle any with a space focus?
I am an Executive Producer of the documentary film, “The University” about the Singularity University to be released later this year. (Based in NASA’s Research Park in the heart of Silicon Valley, Singularity University is cultivating future leaders who can harness the power of exponential technologies to improve the lives of a billion people within a decade).
Q. Lastly, how historic is the SpaceX mission from your unique vantage point as a space industry insider and documentary filmmaker?

With the shutting down of the Space Shuttle program, and the reliance on Russians to taxi American astronauts to space, SpaceX is really the only game in town.Other than the Falcon 9, the U.S. has no clear, compelling, sustainable path for man-rated launch capability.
When I interviewed Elon Musk for “Orphans of Apollo,” very few people on the planet would have imagined that SpaceX would have the chance to become the centerpiece of the U.S. manned space program.
Today if you walk into the gift shop at the Kennedy Space Center, the very first prominent display is the SpaceX hats, shirts, mission patches and other space memorabilia. This was unimaginable three years ago.
If you work at Kennedy Space Center, own a restaurant or a hotel in Cocoa Beach you are probably a fan of SpaceX.
Through the most important American institution of all, private enterprise, Elon is injecting creativity, excitement, passion, ingenuity, challenge, into space enterprise. If SpaceX continues to succeed, both tangibly and symbolically, Elon will have to be viewed as one of the most significant space leaders of the decade.