Books for Heroes – A Worthy Cause 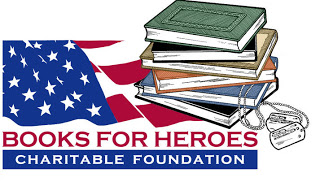 No soldier should be without a book.

The idea for the charity began in 2003 when a soldier walked into a bookstore Scott was managing at the time and purchased $96 in magazines. At the checkout, he asked Scott for a box. “I told him I would give him a box if he told me why he wanted it. He said his buddy was in Iraq and had nothing to read.”

That afternoon Scott told a customer he was going to ship books to soldiers in Iraq, and that customer wrote Scott a check for $100 to start him off. Scott recalls how she returned 30 minutes later after talking to her husband, an accountant. “I thought she would want the check back. But, he told her to turn the car around and write me a check for another $400. I used my employee discount to buy $500 worth of books that day to ship to soldiers.”

Scott, who is now co-owner of Peerless Bookstore in Alpharetta, Georgia, finds it hard to believe how far the charity has come since that first day.

“The idea has definitely blossomed – it has become something far greater than I ever thought it would become. It hit me when Random House said they were going to clean out a closet then sent me two pallets. The pallets arrived on my day off and the store employees called me, saying that two pallets of books outside the door and they couldn’t get them through the door.”

Thanks to the generosity of numerous book publishers, bookstore customers and trucking firms, Books for Heroes has shipped 20,000 books to armed forces overseas. In May, the charity got a major boost when bestselling author James Patterson donated  200,000 of his own books to soldiers through the charity. The unprecedented donation drew the attention of Publisher’s Weekly.

Peerless Book Store’s shopping center has loaned storage space for some of the 62,000 books in Alpharetta. Nineteen volunteer JROTC members showed up at the Books for Heroes storage space to help unload the books as they arrived, before being distributed to Afghanistan, VA hospitals, and U.S. military bases. For the latter, 10 bases were selected to receive a few thousand books each, with Fort Benning in Georgia already receiving its shipment.

Scott says his goal with Books for Heroes is to make sure that every VA hospital in the country has a library for soldiers who will never leave the hospital.

“I also want to make sure soldiers with boots on the ground have books to read. Soldiers that are in countries who cannot go to a neighborhood bookstore because there isn’t one and if there is one, it’s not in English.”

Scott firmly believes books provide something our men and women in uniform need: stress relief. “When I’m stressed out, I pick up a book and I go somewhere else. Soldiers’ stress is far beyond anything I’ve ever dealt with. They’re losing their friends right next to them. They’re going through things most people just cannot fathom, and to be able to open a book and go someplace else for whatever period of time, is hugely beneficial.”

Looking for a way to say thanks to our military servicemen and women? Give the gift of books.
Books for Heroes welcomes financial contributions to buy requested book titles and to help defray postage costs.